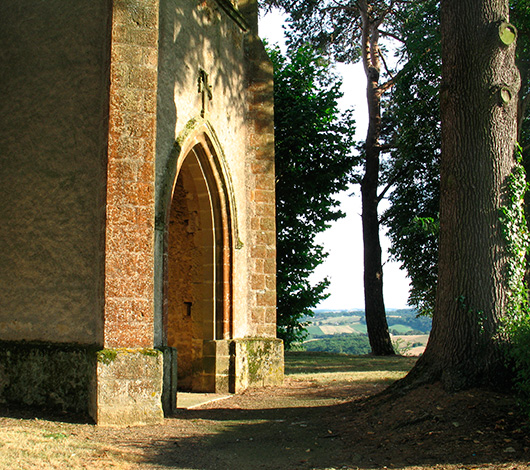 The river Midour rises in the village and then crosses Gascony for 105 kilometers on a route formerly lined with watermills. The village is also on the famous  « Caesar Route ».

Formerly named « Ténarèze » this ancient, prehistoric road was formerly the link between Bordeaux and the central Pyrenees and its path avoided the need to cross a single bridge or ford. For several centuries, it was a major cross border route and was also used for transhumance. A watershed between the Adour and the Garonne basins, the road was also used and improved by the Romans.

Local toponyms, « Mauran » or « Fontarabie », evoke the Arab troups’ withdrawal after their defeat in 732 in Poitiers against Charles Martel.  The same troups who were to fight in Bassoues, against Saint Fris-to-be and his men.

« Armous et Cau », formerly two villages, originally belonged to the lords of Saint Christaud, then, in the XIIth century, to the Case Dieu Abbey, one of the principal monasteries in Gascony.

In the XIth century, the church of Armous (which doesn’t exist any more) was dependent on Saint Mont Abbey. The modern church (XIXth century) was built with the stone from the former churches of Armous and Cau.