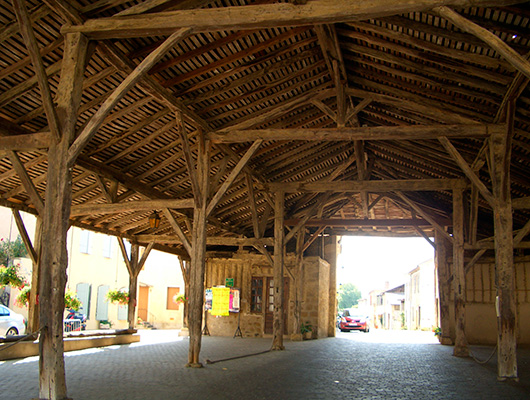 View from the top of the dungeon

The history of Bassoues is closely linked to that of a prince of legend that centuries called Saint Fris.

It is indeed in 732, at a place called today "Le plateau de l’étendard" that Fris, son of Rabbod, Duke of Friesland, and nephew of Charles Martel, converted to Catholicism, planted his banner in Bassoues, to rally the Franks defeated by the Sarrasins on the heights of Lupiac.

The victory is assured but the sacrifice is immense. Fris reached by a deadly arrow expired near the bridge called later the "Christian bridge”. His body, secretly buried, was miraculously discovered by a shepherd,  two centuries later.
As miracles occurred, a sarcophagus received the holy relics and a church was built in honor of the famous martyr warrior.

In November 1020, Raymond, Lord of Bassoues, gave St Fris church to the  Pessan monks, provided that was built a Benedictine monastery near the grave of the saint : the Basilica of Saint Fris. The convent was occupied by the monks, but several times devastated. In 1270, there was only one monk left, so the place was given to the Archbishop of Auch, Amanieu II Armagnac.

An act of 1283 designates the place of Bassoues as Saint Fris parish.
Lord of Bassoues, Amanieu II gave letters of customs to the inhabitants in 1295, shortly after the founding of the Bastide.

His successor, Archbishop and Cardinal Arnaud Aubert, nephew of Pope Innocent VI, built the walls, the residential castle and dungeon completed in 1371.
It was not until 1510 that the Church of Our Lady, in the heart of the bastide, will be devoted parish church.
In the sixteenth century,  Cardinal Clermont-Lodeve erected the market hall and improved  St Fris basilica with two Renaissance portals.
Bassoues is now a charming small medieval village with its fortifications, its XIVth century dungeon, its beautiful hall, its basilica, and its inhabitants lulled by the legend of Saint FRIS for ages.