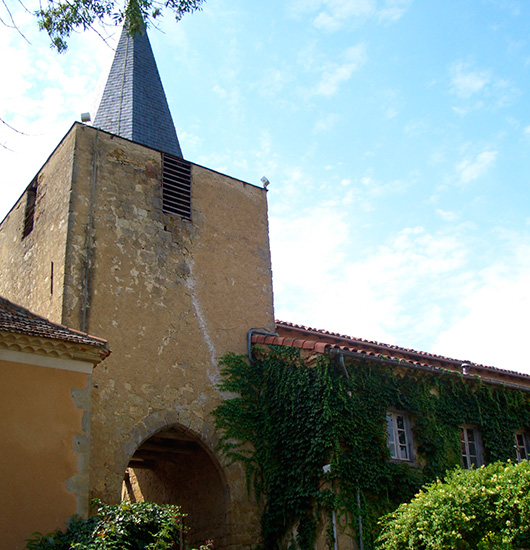 Built on  top of the crest line between the valleys of the rivers Losse and Guiroue, Castelnau d’Angles belonged, as early as the XIIIth century to the seigneury of Montesquiou, barony of Anglès.

The lands and seigneury, through direct or indirect inheritance, belonged to this well-known family until the XVIIIth century.

In the XIIIth century, the Templars had some  properties there (En-Martin barn and Rambos hall). In the XVth century, a thriving glassmaker activity was recorded near the Montpellier forest : later tile works could be found there.

The one-street village and the church of this « castelnau » was formerly  protected by defence walls and two fortified gates. Saint Peter’s church is the only vestige which is still used today as the church belfry. This small  rural church was decorated in the XVIIth century by a monk, Jean Lamy, from the order of St Antoine.

The seigniorial castle was strangely situated outside the walls.  The Dungeon and the two towers (12 to 14 metres high)  in danger of collapsing were demolished and rebuilt differently in the XIXth century. Only small fragments of foundations remain.