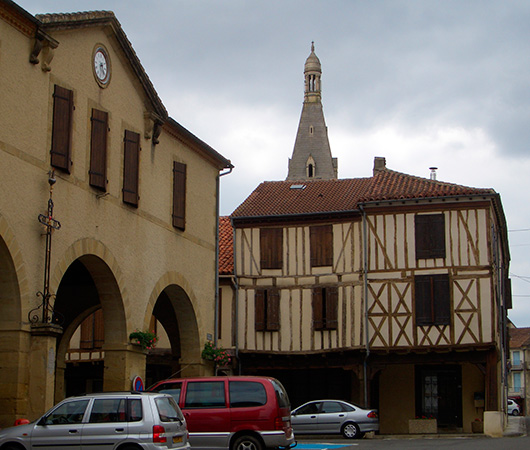 Under the Town Hall...

Small « bastide » (new town during Middle Ages) founded in 1284 Miélan belonged to the Affites country, strategically located between the counties of Astarac, Pardiac and Bigorre, which could control two ancient routes  connecting Toulouse to the Basque Country and the Pyrenees to Bordeaux.

The discovery of sarcophagus provided evidence a earlier occupation, probably a gallo-roman.

The bastide suffered harshly from the ravages of the Hundred Years War but it was later rebuilt on a more modest scale.

The creation of the royal road from Auch to Tarbes during the XVIIIth century boosted the local economy (Miélan was provided with a coaching inn and a post office). Later, the establishment of railways between Auch and Tarbes further strengthened Miélan’s standing.

During the first part of the XXth century, Miélan had one of the most important pig markets in France and was the centre of  production for the pig breed known as « de Miélan ».

To see in the town : Saint Jean Baptiste Chapel, the « promenades » and the Bailiff’s mansion.