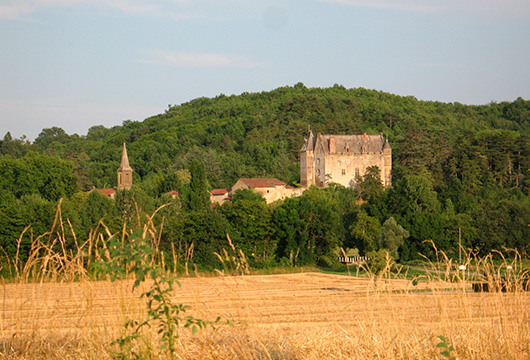 Situated up the right bank of the river Osse, the village of Monclar (formerly Moncla) is an ancient gascon « castelnau » built during the XIth century.

In 1068, Bertrand de Marrens, direct descendent of the French King Clovis, got from his father, the Lord of Montesquiou,the lands of Moncla and Marrens from which he takes the name. In 1088, on a rocky promontory, he built a fortified tower surrounded by houses and safeguarded by a circular wall. Thus formed, Moncla « castelnau » can overlook the Osse valley and became a strategic point to control transport routes passing through the Seigneurie de Montesquiou.

Around 1393, Hugues de Marrens’ daughter  married the Count of Astarac’s Brother, Jean d’Astarac. This new lord of Moncla fought against the English on the side of the French King, Charles VII and restored the castle, damaged by fire. In 1455, his daughter Catherine married Jean de Lasséran.

In 1577, their great grandson, Jean-Alexandre de Lasséran, together with the Chevalier d’Antras, assuming joint command over the Garrisons of Armagnac and Pardiac in order to liberate the town of Mirande besieged by French Huguenots.

In 1700, his descendant married  Jean-Bernard de Seissan de Marignan. Their granddaughter Sophie-Christine and her husband are the direct ascendants of the current owners of Moncla castle

Around 1880, Moncla castle was restored in a neo-gothic style. The  feodal castle has only kept today the square dressed stone tower and the western façade pierced with two trefoil windows now walled. In the southwest corner, a round tower built on a square base was used to keep watch over the valley.