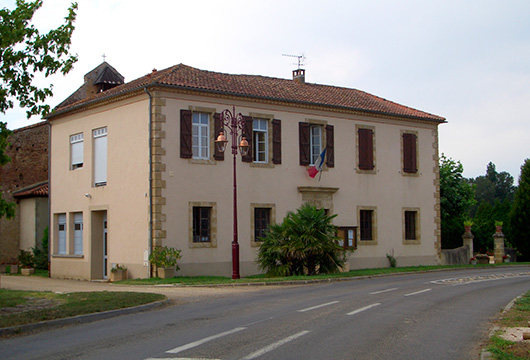 The entrance to the church

The village was settled near the river Baïse.

The proof of a rich Gallo-Roman occupation can be seen through the various remains found on a Gallo-Roman villa site such as  a mosaic of the end of the fourth century A.D embedded in the church wall, and a tresure of 91 coins from the second part of the third century A.D.

Later a monastery was established. The name of the village,  could come from the latin word « monasteris ».  After a period of autonomy, the monastery was given to the Benedictine order  then to the Cluny order and became quite prosperous during the  XIIth and the XIIIth centuries.

During the XVIth century, the village suffered from religious wars.

The fountain of Sainte Radegonde situated outside the village at roadside was supposed to cure sick children. There pilgrimages were organized just as in the 140 other fountains in the Gers.

Point of interest in the village : St Julien Church which could be a pre-Roman edifice.