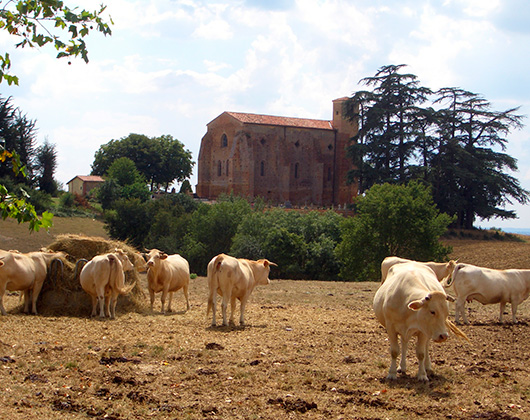 Church listed as a historical monument

On the Compostelle Pilgrim route...

Formerly part of the Comté de Pardiac, closely linked to the Comté d’Astarac, Saint Christaud, surrounded by hills and valleys with views on the Pyrenees, is at the crossroads of two historical routes :

* The « route de César », antique prehistoric road later consolidated by the Romans was long ago the way to join Bordeaux and the Pyrenees without having to cross any bridge or ford.

* The « Pilgrims’ route from Arles », one of the four routes to Santiago de Compostela (Chemin de Saint Jacques de Compostelle)  passes through the village. These routes which meet in Gascony before going to one of the three great christian pilgrimages  have been named « first cultural route » by the Council of Europe.

At the village entrance, a gothic style gate shows the place where the old castle stood. In the XIXth century it was replaced by the present one.

In 1851, Saint Christaud republicans were heavily involved  in the Resistance front against Napoleon III’s coup d’état. The movement was important in the region and especially in the Mirande area and was severely punished.

To see in the village : the church listed as historical monument and  cemetery.