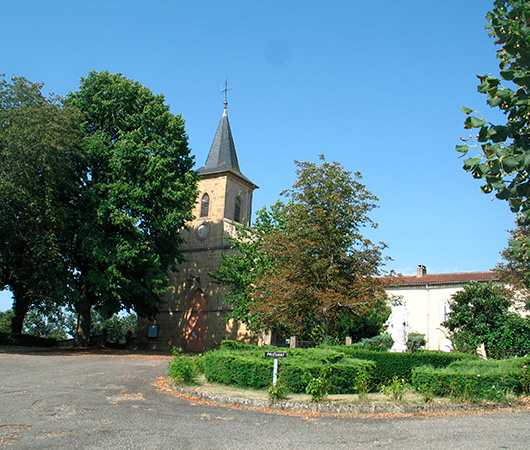 Stone erected to the memory of resistance fighters

Overlooking the river Osse valley, Saint Maur, formerly in the Comté d’Astarac and crossed by the road from Paris to Barèges ( below the Pic du Midi), is  surrounded by hilly landscapes and many small tributaries of the Baïse River.

Remains attest that the village was founded on the site of a former castrum ( military camp).

In 1121, for the dedication of the metropolitan Church of Sainte-Marie, St Maur’s relics were taken to Auch with some from surrounding areas.

A monastery founded by the Comtes d’Astarac existed in the XIIth century. Later, it became a dependency of Saint Pé de Bigorre abbey.

Round 1570 during the religious wars, the monastery was presumably attacked by the Calvinists to such an extent that it had to hide its holy relics in the monastery of Peyrusse Grande.

The church and its monastery were rebuilt in the XVIIth century before being totally destroyed in the XVIIIth.

The monastery and its properties were sold after the French Revolution when the village was temporarily called « montagnarde ».

To see in the village : the church built on a XIth century foundation. A remembrance stone to honour resistants killed in action during a battle at Saint Maur in 1944.