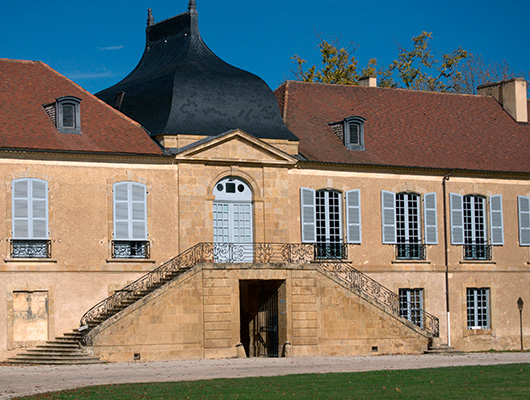 Stone dedicated to the cartoonist Cham

L’Isle de Noé geographical situation on the  « Route des Bastides et des Castelnaux », and at the confluence of the Grande and Petite Baïse rivers, explains the name of the village.

The castelnau was founded around 1090 by Géraud d’Arbéchan. The place was chosen for its natural rivers protection, strengthened by strong stone walls with four gates.

The famous route from Arles to Compostella already went through the village. The pilgrims could find food and hospitality, in the « l’Hôpital », at the village entrance.

The inhabitants  were given customs in 1271.

Until then,the village was known as L'Isle-d'Arbéchan. During the XVIth century, L’Isle becomes a possession of the powerful Noé family and takes its name until the French Revolution. During that period, the village was called L'Isle-Baïse.

In the middle of the XVIIIth century, The Noé family started construction of a new castle  to replace the old medieval castle.

The village history frequently mentions important floods from the Baïse river. Some were disastrous (1897 – 1977).