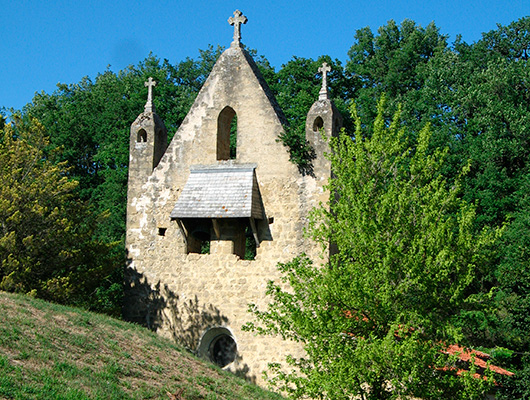 Once composed of three parishes and two seigneuries, the village,  through which the Petite-Baïse river runs, is composed of two parts : Lamazère and Labarthe.

Various remains among which a remarkable funeral monument are a proof of a gallo-roman life in the area.

In the Middle Ages, several Lamazère landlords belonged to the high clergy. The Comtes de Termes were the last lords of the village.

Near the church can be seen a feudal mound, the perfect place to keep a close eye on the Petite Baïse River ford ; it was abandoned during the XIIth century for the present castle which formerly had a small «  castelnau » below .

At the same time, Labarthe lords had rights over the second part of the present village.

The old royal road – today a large field path – crossed the southern part of the village to Vicnau post house. Later, the railway between Tarbes and Auch went through this area.

Lamazère church, several times restored , shows supposed roman remains ; in the southern side of the church can be seen an unusual local war memorial made of ceramic.