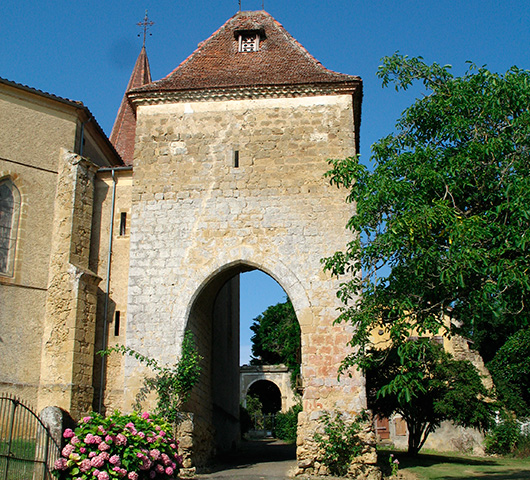 A village steeped in history

Water games on the farm

Established on the foothills of the south of Gers, the medieval « Podium Bonum » overlooks the valleys of the Osse and Bouès rivers, at 268 meters high.

Probably, the castle came after a Xth century feudal mould. The small fortified village of Pouylebon was built in the XIIIth century and belongs to the typical villages of the Gers region.

Until the end of the XVth century, Pouylebon was closely linked to the Baronnie d’Anglès. The Montesquiou  were very present during 450 years, until 1782.

The old part including the Church and the cemetary used to be surrounded by walls with two doors overlooking the single street The tower gate (classified as a historic monument) was built in the XIIIth century (the second gate built at the same time was part of the castle which had to undergo a major rehabilitation in 1767).

Sainte-Anne church was founded in the Xth century and knew several renovations especially during the XIXth century : then it was partly demolished and rebuilt without a wall belfry anymore but you can still discover some XVth century remains.

Pouylebon is situated on one of the four roads to  Santiago de Compostela (the « via tolosana », from Provence with a stage at Arles and Saint Guilhem le Désert). It also had a church (église de l’hôpital) of which there remains no trace.